Exercise 1
1 1.1 Explain the difference between longitudinal and transverse waves and give an example of each.
1.2 It is possible to represent a longitudinal wave by drawing a graph having the wave-form of a transverse wave. Explain carefully what it is that you are plotting on the x and y axes.

1.3 The diagram shows the positions of some particles as a sound wave passes through the medium. Redraw the diagram.

1.3.1 Explain what is meant by compression, rarefaction, amplitude and period and mark these on your diagram.
1.3.2 Plot on your diagram the new positions of the particles when one quarter of a period has passed.
1.3.3 Which particles are moving in phase?

4 4.1 Why do you not hear an echo when you are close to the reflecting surface?
4.2 Explain why:
4.2.1 Sounds are louder in an empty room than in a furnished one.
4.2.2 The sound of a speaker in the school hall is much clearer if the hall is filled with people.
4.2.3 It is difficult to hear your teacher speaking out on the sports field. How does a megaphone help to increase the loudness of the teacher’s voice?
5 5.1 When you are x meters from a cliff face you shout and 2,5 s later you hear the echo. If the speed of sound is 350m.s-1 on this day calculate the value of x.
5.2 What factors affect the speed of sound?
5.3 Astronauts on the moon carried out experiments in which they detonated explosive charges on the surface. Do you think that they would hear the explosion? Give reasons for your answer.

6 Two learners carry out an experiment to measure the speed of sound. Patrick fires a starting pistol and Simphiwe measures the interval between seeing the flash and hearing the sound. The boys are 495m apart and the time taken by the sound is 1,5s. When the boys change their positions the time interval measured is 1,4s. Calculate the value of speed of sound according to these results.

7 A time keeper at the finish line in a 200 m race starts his watch when he hears the sound of the pistol instead of when he sees the flash. If the speed of sound is 340 m.s-1 what is the error in the time he records?

9 9.1 Explain why sound waves sometimes change direction when they travel through still air.
9.2 Use diagrams to explain the fact that it is easier to hear sounds at night than during the day.

10 You put one ear against the railing of a steel fence. Your friend taps the fence some distance away. Explain why you will hear two taps. Which tap will you hear first?

11 Classify the following as true or false. If false correct the statement.

i. When sound is reflected the angle of incidence is greater than the angle of reflection.
ii. We hear the sound of a tuning fork because air particles move from the fork to our ears.
iii. Sound travels faster in gases and liquids than in solids.
iv. A wave undergoes refraction because the frequency changes when the medium changes.
v. Sounds at night are louder because the air near the ground is cooler than the air higher up.

Exercise 2
The graph shows the displacement of an air particle with time as a sound wave moves past. Use this for questions l and 2

10 If the speed of sound in air is 330m.s-l a person who fires a pistol at a distance of 165 m from a cliff will hear
A. No echo at all. B. An echo after 1 second
C. An echo after 0,5 s D. Two echoes in 1 second
Exercise 3
1 Write down the function for each of the given parts of the ear. Hammer, anvil and stirrup; Cochlea; Auditory canal; Semi circular canals; Ear drum; Auditory nerve

2 2.1 What happens at the eardrum when a sound wave reaches it?
2.2 Where does the actual hearing of sound take place?
2.3 Is the signal received by the brain a sound wave?
2.4 Why do you go deaf when you have been in an aeroplane?
2.5 The composer Beethoven was deaf for most of his life but he could “hear” music by using a hearing horn placed between the bone behind his ear and the piano. Why did this help?
2.6 Why can we not hear the squeaks emitted by a bat or the sound of its wings in flight?

3 The diagram shows a siren. Slowing air on the wheel as it rotates produces the note of the siren. 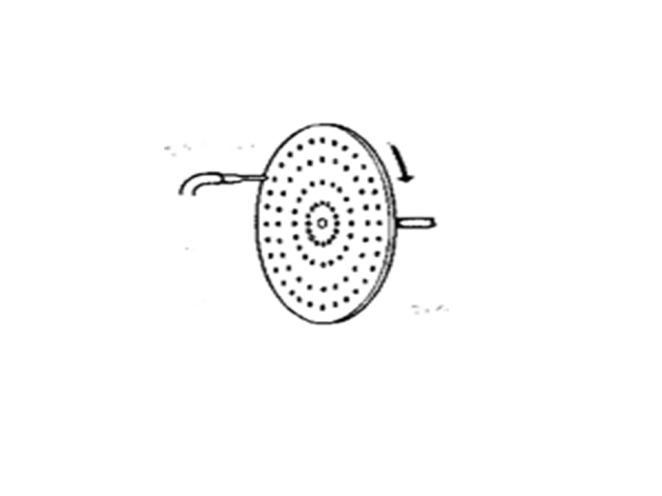 3.1 What will happen to the pitch of the note as the speed of rotation increases?
3.2 Suggest a way in which the note may be made louder.

4 A stiff piece of card is held on a toothed wheel having 40 teeth and rotating at 2,5 revolutions per second.
4.1 What is the frequency of the sound emitted by this device?
4.2 What is the wavelength of this sound in air? (Use the speed of sound as 330m.s-1).

7 A man sings a note of frequency 294 Hz while a woman sings a note an octave higher
7.1 What is the frequency of the note that she sings?
7.2 Calculate the wavelength of each sound in air. (Speed of sound = 330m.s-1)

8 8.1 Name three characteristics of a musical note that will make it sound different from other notes.
8.2 Draw diagrams to show how two notes may differ in i) frequency ii) amplitude.

9 Two identical transverse waves A and B travel through the same medium. The diagram shows the positions of the two waves at t = 0 and t = T/4 where T is the period of either wave.

10 A fork of frequency 324 Hz gives the first position of resonance with a closed tube 25 cm long. Use this information to calculate the velocity of sound.

11 After dinner the singer Caruso would entertain his guests by singing a note that would make a wine glass break.
11.1 What is the name of this phenomenon?
11.2 Why did it require a particular note to make the glass break?
11.3 What caused the glass to break?

12 12.1 Compare the fundamental vibration in a closed pipe and an open pipe with reference to (i) the wavelength (ii) the frequency.
12.2 Which pipe can produce odd and even harmonics?

13 13.1 Draw the first and second overtones for an open pipe.
13.2 Explain why these notes are also known as the second and third harmonics.

14 A closed pipe sounds its fundamental note when the length of the pipe is 16cm. What is the frequency of this note? Take the speed of sound as 320 m.s-1.

Exercise 4
1 The part of the ear which converts vibrations into electrical signals is
A. The auditory nerve B. The cochlea
C. The hammer, stirrup and anvil D. The semi-circular canals.

4 The note from a flute and a piano must be different in
A. frequency B. quality C. loudness D. pitch

2 thoughts on “Waves and Sound”