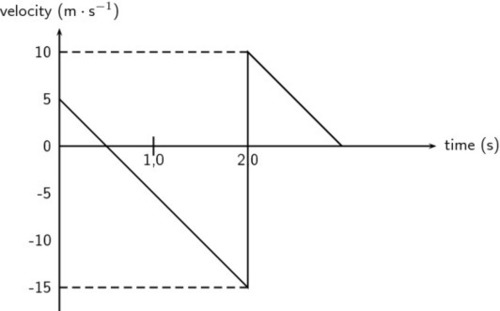 A ball bounces vertically on a hard surface after being thrown vertically up into the air by a boy standing on the ledge of a building.

The graph below shows the velocity of the ball as a function of time from the moment it is thrown upwards into the air until it reaches its maximum height after bouncing once.

At what velocity does the boy throw the ball into the air?

What can be determined by calculating the gradient of the graph during the first two seconds?

Determine the gradient of the graph over the first two seconds. State its units.

How far below the boy’s hand does the ball hit the ground?

Use an equation of motion to calculate how long it takes, from the time the ball was thrown, for the ball to reach its maximum height after bouncing.

What is the position of the ball, measured from the boy’s hand, when it reaches its maximum height after bouncing?

← Conservation of momentum in two dimensions
Resolving forces into components →